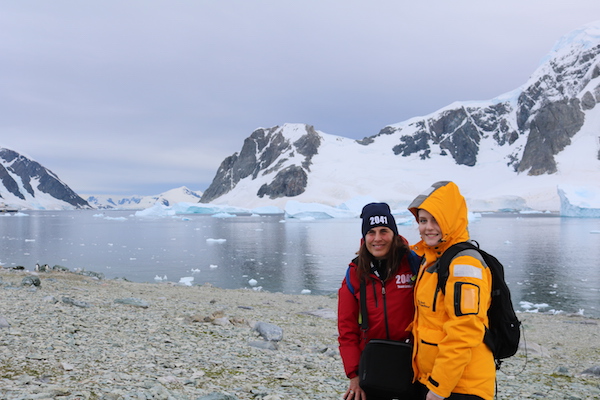 In 2007, explorer and environmentalist Robert Swan was a guest speaker at TASIS. Wendy Gediman took her Pre-K class to hear him speak in the theatre. Returning to her classroom after the talk, she found that she had a children’s book written by Swan, which told of his walk to the South Pole in 1985-86. This was the journey which changed his life and led him to become an ambassador to protect Antarctica.

When Ms. Gediman asked him to sign the book, he invited her to come to Antarctica, and thus began her long relationship with the mission of his foundation, 2041 Climate Force. Swan’s expeditions teach Leadership on the Edge, focusing on how to be a leader in sustainability at home and in the workplace.

Ms. Gediman first went to Antarctica on a 2041 expedition in 2008. This was followed by a return in 2013, 2016, and recently in 2018. Three of these expeditions were by ship to explore the Antarctic Peninsula, an incredible place teeming with penguins, seals, whales, and birds. The other expedition was by air, into the interior of Antarctica, with a small team of 14 people. The mission involved testing sustainable technology to prepare Swan and his son Barney to walk to the Pole using only renewable energy in November 2017 through January 2018 – a first. This was a very different Antarctica, devoid of any life, but full of majestic beauty.

Ms. Gediman was appointed as Robert Swan’s Education Advisor and, in March, had the amazing opportunity to not only return to Antarctica. In addition, she had the privilege of taking a TASIS student with her! Tenth-grader Gabrielle N. accompanied her on the trip to learn about climate change and solutions to help heal our planet. Gabrielle had spoken to Ms. Gediman last year, asking about the Antarctic Treaty, and has since developed a keen interest in Antarctica and sustainability.

The expedition brought people together from around the world, ranging in age from 13 to 70, to learn about how to become sustainable leaders. Antarctica holds 90% of the world’s ice and 70% of the world’s fresh water. It is the last untouched continent on our earth and a place that needs to be protected if it is to stay this way.

Gabrielle is a passionate young lady, and has written a reflection of her experience:
“When the Zodiac was stopped, and the motor shut off, there was only the sound of the wind. A whistle that was deafening in its solitude, the true sound of emptiness. We sat, huddled in our little boats, bobbing amongst drifting pieces of blue-white ice, looking up at vast, jagged mountains that rise out of the water. Antarctica is like a new planet, with islands so full of penguins it looks as though the ground is moving, abandoned shacks from past explorers frozen in time: books still open, teacups still half full. At night, the sky is packed with stars, the Milky Way glowing in its soft nebula, the moon so clearly defined you can almost see the footsteps of astronauts

One day we saw an enormous bird, with the sharp eyes of a hawk, that hovered above us, looking as shocked to see us as we were it. Here the animals are not scared to see us, only curious, the silence of nature is deafening, and the land and sky glows with a majestic glory. These features are not anomalies in nature, but they are now, because of humans. As we develop and conquer, discovering and innovating, we are careless of the world around us, which we do not own. We cannot reverse our damage completely, but we can mitigate it, and we can protect what is left from ourselves. This pristine place deserves to be protected, and we must do everything in our power to do just that.”