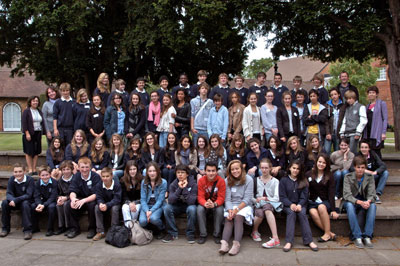 Thirty students and 3 teachers were from a secondary school in Nantes visited the TASIS Middle School this week to connect "in person" with their pen pals. The initial introduction was made through the family of a former TASIS student who has since returned to his native France. Mrs. Dias seized on this opportunity for students to connect with French teens of their own age, and the project began in the fall with students exchanging a few letters.

Since the beginning, the vast majority of the students were not only in contact using their teachers and letters written in class as a formal channel of communication, but they also used email and Facebook to contact each other. Thirty 6th, 7th, and 8th grade TASIS French students were involved, and the group included students with a range of proficiency in French. The group also included some 8th grade English students, to help their French counterparts become more adept in English. .

While on campus, the students joined their buddies in classes, socialized, ate lunch together, and enjoyed recess, which included an introduction to lacrosse.

The visit was short, but very sweet.  "Everybody was very happy, " says Mrs. Dias, who organized the correspondence throughout the year, as well as the visit. "Next year, we will carry on with this project, and even expand it further using video conference or Skype."